Home » Women's Health » How Acupuncture Can Enhance Your Feritility

How Acupuncture Can Enhance Your Feritility 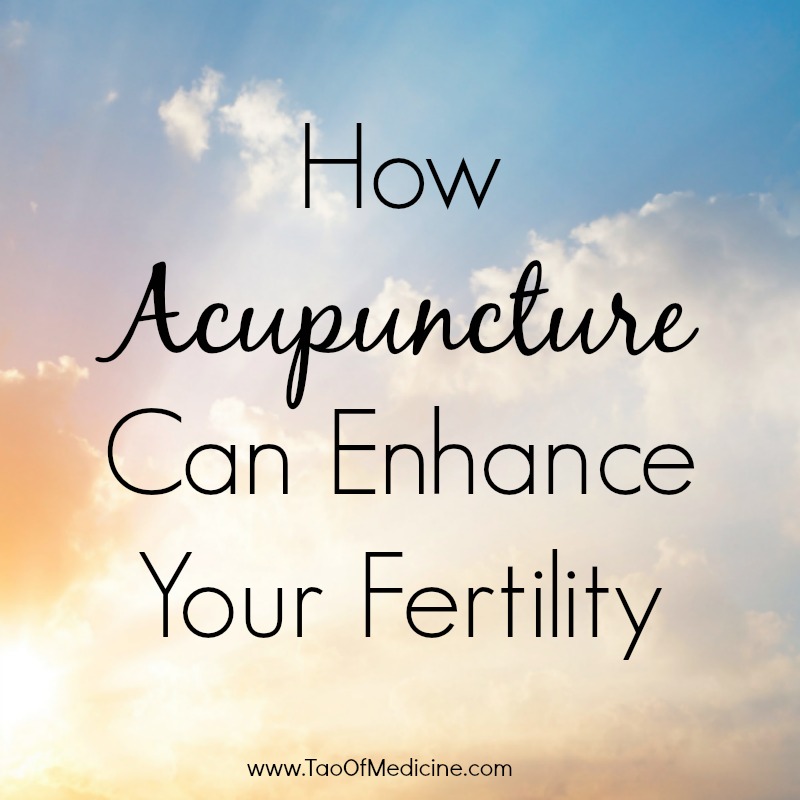 Current statistics state that one in five couples over the age of 30 have difficulty conceiving after one year of trying. Many of these couples are turning to acupuncture and Oriental medicine for a safe, effective and natural solution to have a healthy baby.

Fertility treatments were first recorded by Zhang Zhong Jing, a famous physician from the Han Dynasty, in his discussion of diseases in women in the Jin Gui Yao Lue or Essentials of the Golden Cabinet.

How Acupuncture Can Enhance Fertility

According to the principles of Oriental medicine, a person’s health is determined by the quality of Qi, the vital life energy, and blood circulating through the body. When Qi and blood are circulating properly, the body is properly nourished and functioning optimally which, in turn, enhances fertility.
Researchers have confirmed its benefit in the following areas:

5. Improve blood flow in the uterus.

7. Increase the chance of pregnancy for women undergoing in vitro fertilization (IVF).

Fertility treatments vary from person to person, but are usually scheduled for at least three consecutive cycles (twelve weeks). Treatments can include acupuncture, customized herbal therapy, stress reduction and dietary counseling. Treatments work alone but are an excellent addition to any Western intervention.

Please call for more information and schedule a consultation.

Women undergoing IVF were 65 percent more likely to become pregnant when they combined the procedure with acupuncture, a recent study has shown.

The remarkable success rate occurred across seven acupuncture trials involving 1,366 women in a systematic review and meta-analysis published in a February, 2008 issue of the British Medical Journal.

Acupuncture was delivered either just before or just after embryo transfer – a step in the process of in vitro fertilization (IVF) whereby one or several embryos are placed into the uterus.

The research was carried out by scientists from the University of Maryland in the United States and the VU University of Amsterdam in Holland.

It is thought that acupuncture stimulates the neurotransmitters that trigger the production of gonadotrophin-releasing hormone, which controls the menstrual cycle and a woman’s ovulation.

Acupuncture is also thought to stimulate blood flow to the uterus and boost the production of endogenous opioids, inducing the body to relax.

A study published in the July 2005 issue of the journal Fertility and Sterility found that acupuncture helped infertile men by apparently helping improve sperm quality in their semen.

Acupuncture was associated with fewer structural defects in the sperm of men who received it, although it had no effect on other abnormalities, such as sperm immaturity or premature death.

According to Oriental medicine, the energy of the Kidney system is important for reproduction and fertility enhancement often starts with the Kidneys. A good example of a food that nourishes the Kidneys and promotes fertility is black beans.

From an Eastern perspective, black beans are warming in nature. They are thought to tonify the Kidney Qi and nourish Yin and Blood.

From a Western perspective, black beans are an excellent source of protein, folate, iron and fiber and are rich in antioxidants.

Research published in the Journal of Agriculture and Food Chemistry indicates that black beans are as rich in antioxidant compounds called anthocyanins as grapes and cranberries, fruits long considered antioxidant superstars.

When researchers analyzed different types of beans, they found that, the darker the bean’s seed coat, the higher its level of antioxidant activity. Gram for gram, black beans were found to have the most antioxidant activity, followed in descending order by red, brown, yellow, and white beans.

Previous studies have shown a link between acupuncture and improved sperm production and motility.